The George V is outrageously expensive. And worth every penny. Here in Paris, the Four Seasons group runs one of their flagships.

Paris is the most elegant city in the world. And in this hotel you live in the most chic area of Paris: In the triangle between the Avenue Georges V, the Avenue Montaigne and the Champs Elysees. If you walk along this triangle of streets, you will pass by the Louis Vuitton flagship store, the L’Avenue (one of the social epicenters for early evenings), Chanel, Dior, Gucci, Cavalli, and virtually all major luxury brands, the Hotel Pershing Hall, one of the most stylish hotels in the city, the Crazy Horse (the most expensive cabaret club in the city, also located on the Avenue George V), and many, many more. Nowhere else Paris, the city of luxury, breathes more luxury than in this little triangle on the border of the 8th Parisian district, the millionaire district, and the 16th district, that even the Parisians respectfully call the district of billionaires.

All this French chic and luxury, including the world-famous Champs Elysees, surrounds you when you reside in the George V. This golden triangle is your new neighborhood, at least for a little while now.

Consider the Superior Rooms the „starter drug“ into the world of George V.
The beautiful marble bathrooms feature Bulgari’s cosmetic line, the bathrobes are heavy and oh-so-soft, and the rooms are a generous 37 to 40 square meters. Other Parisian hotels would describe rooms of this size as suites. 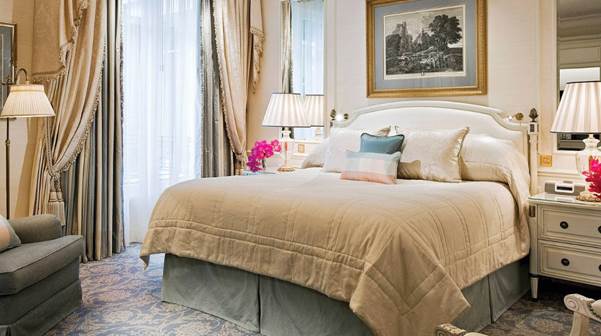 When the first room category of the house looks like this, you know: You have arrived in hotel heaven.

The next category is the Deluxe Room: A bit more expensive, a bit larger. With a huge and almost pompous bathroom where – in contrast to the Superior Rooms – shower and bathtub are separated. There is only a small difference in size (only a few square meters) but you can definitely feel it. The room looks cozier and for longer stays the second category may be the one to pick. 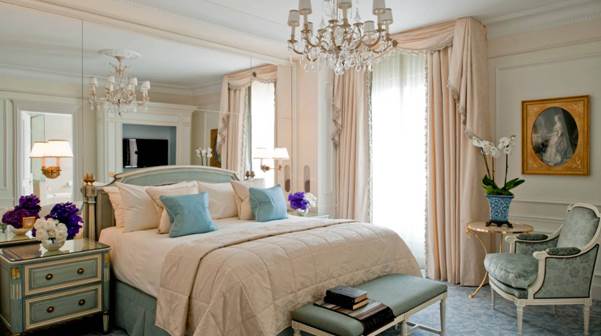 The Premier Rooms can be considered classic Junior Suites (50 to 60 square meters): One large room, a sleeping area and cozy sitting area are separated plus a small terrace, which faces either the Avenue George V or one of the two courtyards, which I’ll tell you about later. Two large double doors, one in the bedroom and one in the sitting area, lead to the terrace.

Try to get a room overlooking the so called Marble Courtyard. That name is actually an understatement, believe me: You will have a view into one of the most beautiful courtyards in the world, which for me is one of the major attractions of the George V.

And now comes a category that the non-millionaires among us should skip, because here it starts: Heaven in Paris, the suites of George V. And because pictures say more than thousand words, let me show you some pictures. Try to imagine yourself in these pictures, pay attention to the details, just imagine yourself walking through the suite and enjoying interior design at its highest level. 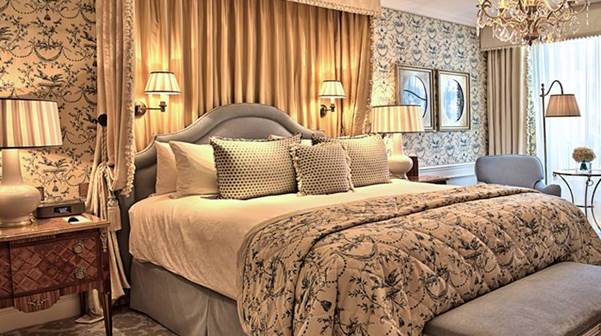 The bedroom of the Parisian Suite: 140 m2 Parisian lifestyle 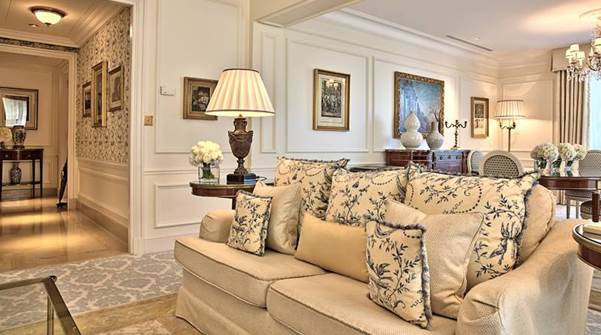 Parisian Suite. This is the place to really live. No other suite of the hotel will make you feel at home like this one. 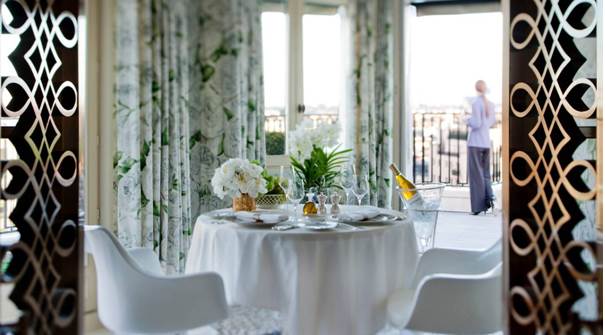 The Penthouse Suite has a beautiful winter garden. And a terrace that is face to face with the Eiffel Tower. 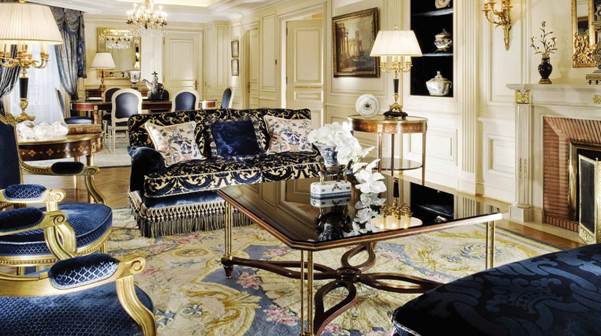 The highlight of the house is the 200 m2 Presidential Suite: Billionaire’s elysium in blue and gold. 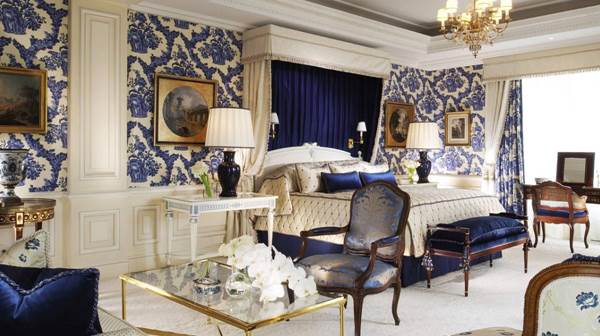 Unique. To me the bedroom of the Presidential Suite is one of the finest-designed bedrooms in the world. 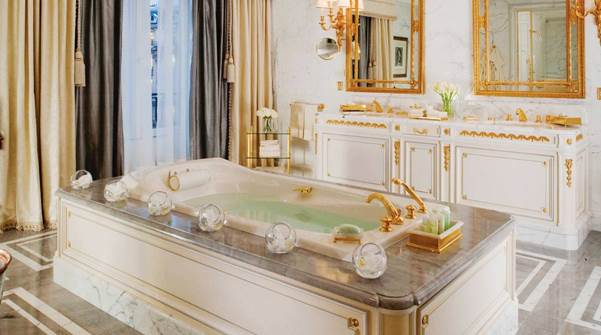 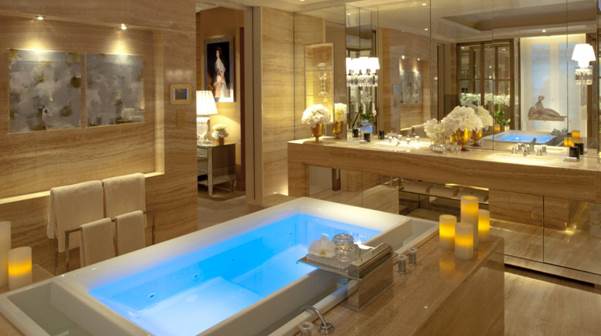 And now, the equally breathtaking bathroom of the Penthouse Suite: Simple, straight, beautiful. 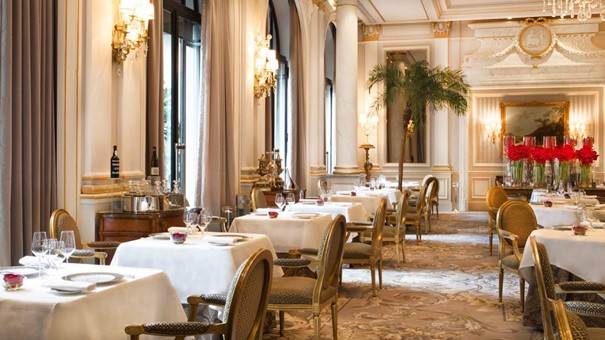 3 Michelin stars for 3 consecutive years, 19,5 Gault Millau points, Le Cinq is among the top in Paris.

“My cooking is like a Chanel suit worn over a pair of jeans”, chef Christian Le Squer has made his point. The atmosphere doesn’t really call for jeans though: You feel like dining in a castle, at a private dinner reception of a duke.

Try the delicious Dublin Bay prawns for a starter, not a bargain for 140 Euro, but for half the money you only get an onion. No, just joking, they are actually famous for their 70-Euro gratinated onion as a starter. It is heavenly. Imagine the best soupe a l’oignon gratinee you’ve ever had. Deduct the soup. And multiply the experience by 100. The onions were soft and sweet with a nuance of caramel. It’s ridiculous what you can make of an onion.

The main courses tell too little about French cuisine for my taste, the newly interpreted Grilled Pigeon is a Parisian standard (not with tonic water and raw turnips though), the other mains are either international or somewhat experimental.

So don’t expect the French thing here, actually try not to expect anything. Let Monsieur Le Squer take you by the hand and guide you through a new world of composing flavours and tastes.

For desserts, he has polarized the French gourmet scene with his “crunchy grapefruit”.

Like all other desserts it is 40 Euros, and when they brought it I thought it was another amuse bouche. It looks exactly like a salmon toast sandwich, even with dill on top. That’s actually a daring composition and I am still unsure whether I liked it or not. It’s a mix of fresh grapefruit and compote, and it tastes sour (although the otherwise extremely knowledgeable waiter promised me it wouldn’t). Sour, a little sweet and caramely and salty, and sour again.

But they make up for it when it’s coffee time, where they serve little pralines and petit fours, which I liked just as much as their fancy grapefruit sandwich.

All in all, it is an experience to dine here. And one thing I can promise you, in Le Cinq, unlike many other world class restaurants, you will remember what you had for dinner even years later.

Oh, by the way, there is two more Michelin restaurants in the George V: The Le George and the L’Orangerie both hold one star. So if you’re coming to Paris for a culinary weekend, you wouldn’t even have to leave the hotel theoretically.

Need a fine-dining break? Go have a cocktail and a snack at their La Galerie, together with L’Avenue the place to go for a fancy aperitif in the neighborhood.

Yes, an own chapter for a yard. This is one of the most beautiful courtyards in the world. 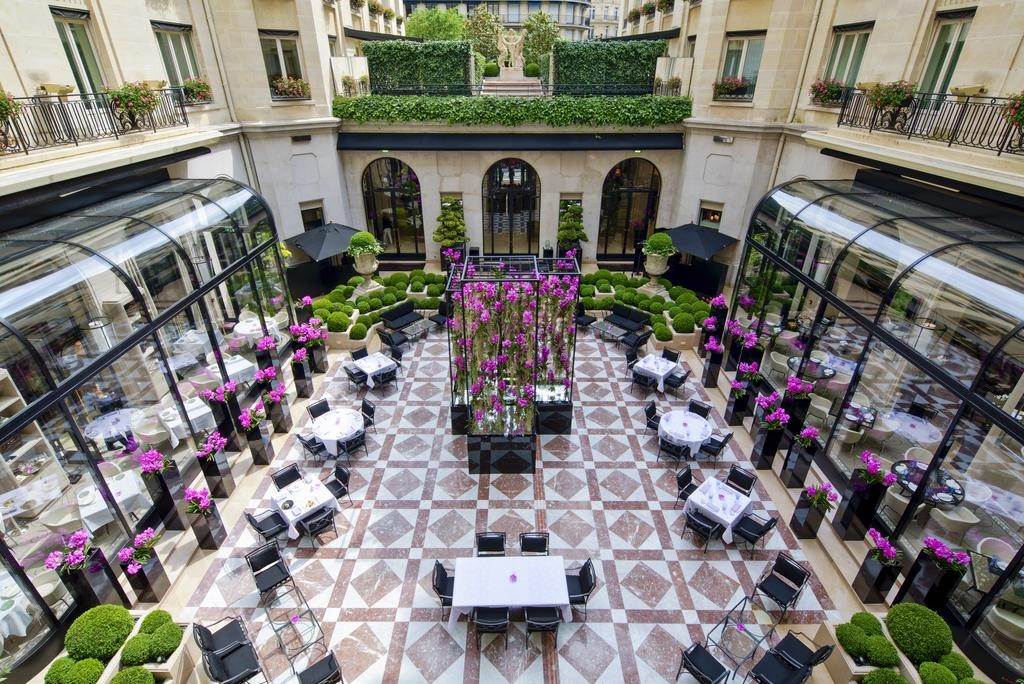 In between the two restaurants’ winter gardens, the L’Orangerie to the left, the Le George to the right, this is a marble oasis in hectic Paris. Take a break, have a glass of Chablis and a little foie gras snack and enjoy the yearly changing flower arrangements.

A 550 m2 Spa should be enough to fulfill all your treatment and relaxation wishes.

It’s light and beautifully designed, and the pool is just so pretty. It’s an indoor pool, but with all its surrounding statutes and frescos and stone balustrades it looks like a pool in a baroque castle’s garden.