This hotel is a legend. For years, top luxury hotels in the world have been compared with the Mandarin Oriental Bangkok. It has set new standards in service and perfection, and still does.

Anyone who has ever stayed here, enjoyed the afternoon tea in the lounge of the Author’s Wing, one of the three wings of the hotel (see cover photo above), who experienced breakfast here, on the large terrace at the banks of the Chao Phraya or who just spent an afternoon by the pool of the Mandarin, will understand in that very moment why everybody is so overwhelmed by this house.

Luxury doesn’t have to be visible at first glance. Mandarin Oriental luxury isn’t really seen, it is experienced, calm and natural. You may or may not like the design of the lobby, you may find the rooms in other hotels more elegant or modern. Tastes differ, but when it comes to service, this is one of the best hotels worldwide. 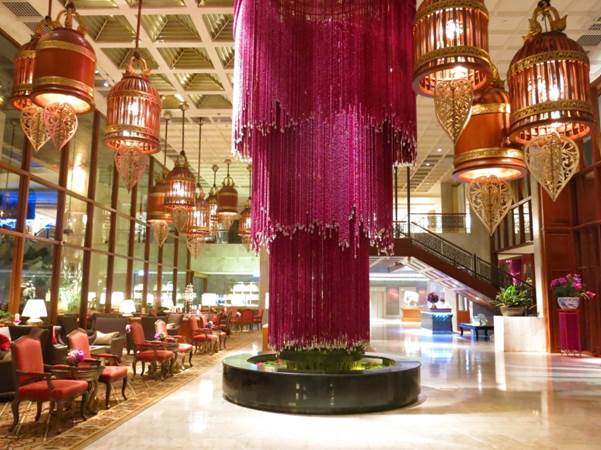 The world famous lobby of the Mandarin Oriental: Crazy design from another time.

There’s no need to name famous guests that have stayed here. Whether presidents or heads of government, princesses or kings, rock legends or Hollywood stars: If they have ever been to Bangkok, they have probably stayed in the Mandarin Oriental. This has always been the number one place in town. There’s one famous photo of Prince Charles and Lady Di in the Authors Wing, and all fans know that Michael Jackson, Mick Jagger or Roger Moore resided here.

Michael Jackson barricaded in the Mandarin Oriental. Yes, in Bangkok. And of course right here, in the Mandarin Oriental. The child’s parents furiously followed him to Bangkok, and Jackson, who was supposed to play concerts of his „Dangerous“ tour in Asia, simply canceled them and barricaded himself in the 185 m2 Selandia Suite. The suite is located on the top floor at the back of the Tower Wing, with a view of the whole city, but completely hidden from the outside because it is on the back of the building and there is no opposite building. Within hours, word got around where the superstar was hiding, and the hotel was surrounded by the press, fans and protesters. 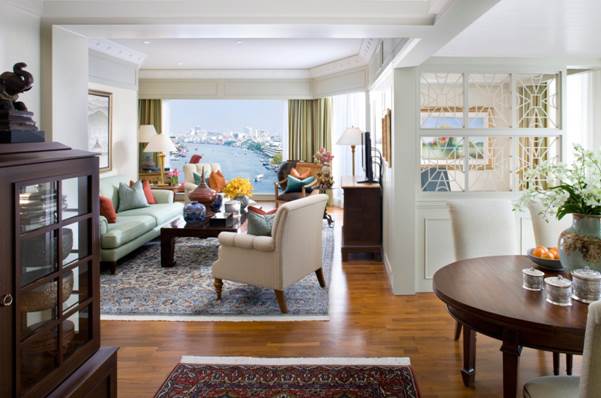 This is the suite the superstar was imprisoned in. He probably did not enjoy the view because apparently he spent most of the time in bed. 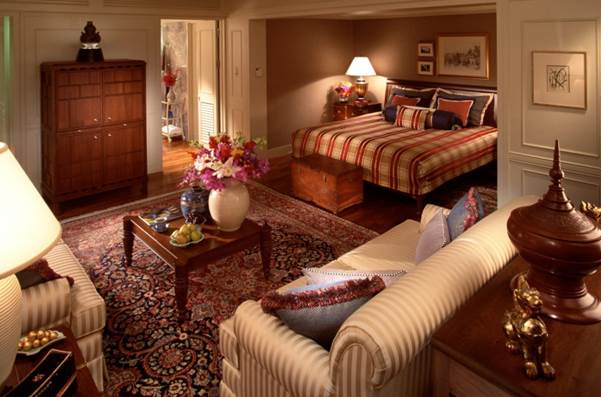 Michael Jackson probably spent the worst hours of his life in this bed.

But even if you remember the television pictures perfectly, one thing you certainly did not know: The very day Jackson was supposed to leave, the German President Richard von Weizsäcker had arrived for a state visit to King Bhumibol of Thailand. And guess where he was booked? Yes, in the Mandarin Oriental, and exactly in the Selandia Presidential Suite, in which Jackson was barricaded for 24 hours, and was unwilling and unable to communicate with anybody. Weizsäcker got the whole story first hand, and tried avoiding a confrontation with the hysterical superstar, who went from suicide announcements to crying in his bed.

He was a wise statesman, and while his diplomats still sent protest notes, he had already chosen the Joseph Conrad Suite, which, although smaller and less representative, is actually much nicer. To be honest, it is the most beautiful suite of the hotel, located in the old wing of the building with a beautiful terrace looking into the peaceful palm garden of the hotel. I can understand the former German President, see for yourself: 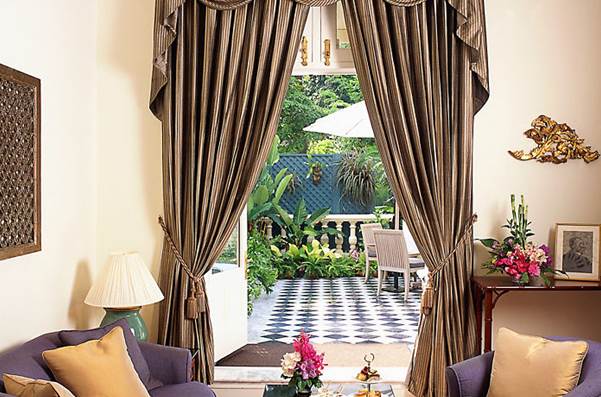 As an mediator between the upset diplomats and the King of Pop in tears, legendary hotel director Kurt Wachtveitl, who took over the house in 1967, once again proved great diplomatic skills.
Eventually Jackson moved out of his suite (despite his „special prize“ of 3,500 dollars a night), the rest is history.

Good or bad location? That’s hard to decide in Bangkok, because in this huge city it really depends on your points of interest. If you simply want to explore town as a tourist, the location of the Mandarin Oriental is perfect. You are only a few hundred meters or a short ride on the hotel’s own ferry from the Sky Train Station, which quickly gets you almost everywhere in the city.

The Mandarin Oriental is located on the waterfront, at the beginning of the famous and always bustling Silom Road, opposite the Peninsula hotel, next to the Shangri-La, two more shining stars in the luxury sky of the Thai capital. And less than 300 meters away you can take the elevator of the Lebua at State Tower to the most famous restaurant in Bangkok, the Sirocco, which has become a city landmark since the movie Hangover 2.

The Lebua at State Tower

The rooms show the hotel’s definition of luxury. Neither are they particularly large nor particularly spectacular. They are simply flawless, like all the rest of the hotel, and they represent elegance and class.
Floor to ceiling windows. Old colonial chic. Shoe cleaning department, great views over the river, comfortable beds, fresh fruits. Butler button next to the bed: just press it and your butler will knock at the door moments later.
The first two categories, the superior and deluxe rooms, are 40 m2 in size and really comfortable. 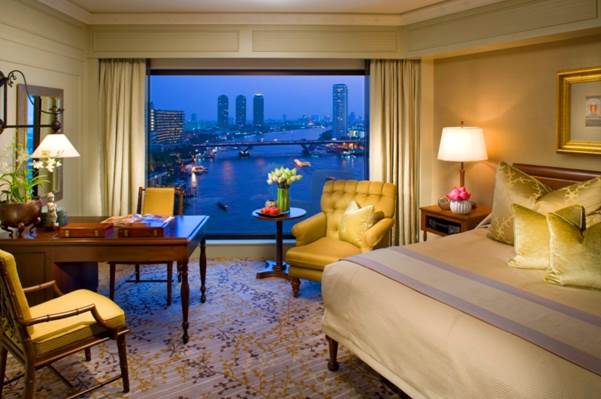 Be sure to book a room overlooking the river. The standard rooms are fine, spacious and comfortable, decorated with style and taste. Upper floors are best – a better view and lighter colours. The modern Premium rooms at the Author’s Wing, costing a lot more than the standard rooms, do not impress me much. Especially to Europeans or North Americans, the style isn’t anything special. They are more modern than the others, but feel like a normal European 5-star hotel. I wouldn’t book them, you lose the whole Mandarin experience.

The Mandarin Room, with its 63 m2, is a good alternative to the first category: An unbelievably cozy space, beautiful, but without a separate bedroom. Those who want two rooms reside in the Author’s Suite with ultimate style. There’s a reason the hotel is so proud of this traditionally furnished 92 m2 suite. And if you like it a bit more modern, have a look at the Deluxe 2-Bedroom Theme Suites accommodating up to 5 people with 125 m2 and two bedrooms. But as said before, the most beautiful suite of the house is the Joseph Conrad Suite in the old wing, 100 square meters, all in cream and blue colors and with a beautiful private terrace.

As mentioned before, breakfast is a highlight. Very few hotels in the world spoil their guests this way in the morning.
Endless choices. Wonderful terrace right at the river. At least once in your life, you have to have breakfast here. You will sit right at the stone balustrade, next to palm trees, looking over the river and watching the many small and large boats passing by. Countless times, when I was enjoying the opulent breakfast on the beautiful terrace, I couldn’t help but wonder who had sat here before. The idols of our parents and grandparents, the statesmen and kings we know from history books.
And I also wondered how long it would take one person to try every single delicacy at this breakfast buffet. But on the beautiful verandah-terrace of the Oriental, between the river and a royal breakfast buffet, right here you realize that you don’t have to try everything.
Simply enjoy the fact that you could, while watching the countless boats on the Chao Phraya that peacefully glide in all directions.

Try to get a table right by the water. If there is no free table, wait a few minutes. It’s worth it, believe me. The views over the hustle and bustle on the Chao Phraya are quite an experience.
In addition to many other delights there are freshly-squeezed juice blends, most of which you probably haven’t heard of before.
Be sure to try the legendary „Penny Juice“, the hotel’s famous signature juice. But by no means read what’s inside before. Otherwise you simply won’t believe me that this juice will be one of the best fruit juices you have ever tried. And you wouldn’t believe what’s in it …

So do not read on now, just skip to the next paragraph. I would hate to tell you that salad, onion, tomato and celery are ingredients of the Penny Juice – that sounds undoubtedly like one of those hip detox green juices, and not the most pleasant ones.
But believe me: It tastes divine. Even though like most normal people I hate vegetable juices. The legendary juice, which to my knowledge is only served at the Mandarin Oriental Bangkok, is named after Penny Wachtveitl, the wife of the former hotel manager Kurt Wachtveitl, who used to run the house for 42 years and is an icon among hotel managers in the world. His wife has been passionately engaged in nutrition and distinct taste. 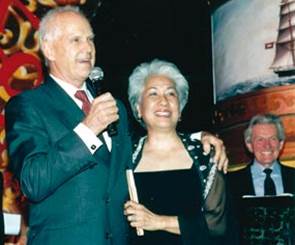 Hotel Manager Kurt Wachtveitl with wife Penny, the creator of the „Penny Juice“

And in long experimental work, so she recalls today, she created a life-extending fruit-vegetable drink. You did read on, I was afraid of it. Regardless, try it anyway, the magic drink that tastes better than the coolest fruit cocktails of Star Bartender in Bangkok. And try not to think of onions, lettuce and celery when you try it.

Here is the handwritten original recipe of the Penny Juice, that Mrs Wachtveitl always keeps in her purse as they like to say. 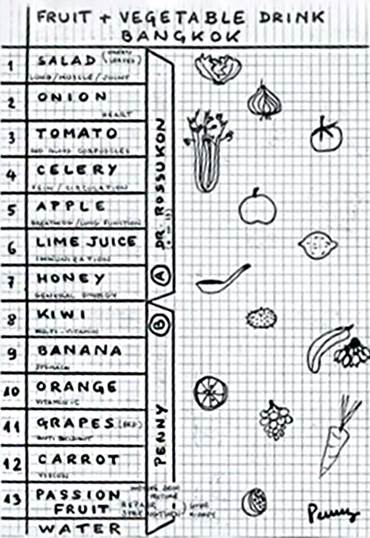 What does the famous breakfast at the Mandarin Oriental have to offer in addition to the Penny Juice?
They serve you delicious breakfast specialties from all over the world. My advise is: Forget your normal breakfast egg this time. Instead, try the many wonderful and exotic delights of this endless buffet. 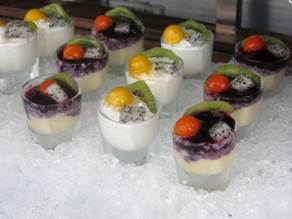 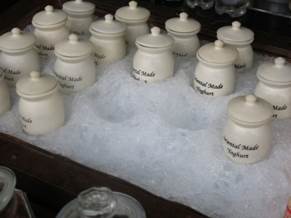 And as a late-bird myself I can tell you: Even if you are late for breakfast, everything is still there. That’s true 6-star service.

For dinner, of course, the fine French restaurant „LE NORMANDIE“ is the highlight of the house.
But quite frankly, and the hotel is going to hate me for that: If you visit from Europe, you don’t really need a high-class European restaurant, do you? Go to the second restaurant in the Mandarin, the „SALA RIM NAAN“, that offers delicious traditional Thai cuisine. Or for a change, leave the hotel and eat in one of the many great Thai restaurants in the vibrant streets of Bangkok. For example, have a delicious green curry in the city’s most famous Blue Elephant – what a Thai food experience.

This will be a short paragraph, because there is not much to say or to criticize. The Mandarin belongs to a handful of hotels that literally offer the best service in the world.

Two outdoor pools, located right next to each other, offer what the Mandarin Oriental guests are looking for: peace, perfect pool service, huge, fluffy
bath towels, comfortable teak chairs with thick cushions. From the smaller of the two pools you have a view of the river.
The greater pool is protectively surrounded by tropical trees and bushes and therefore very secluded. 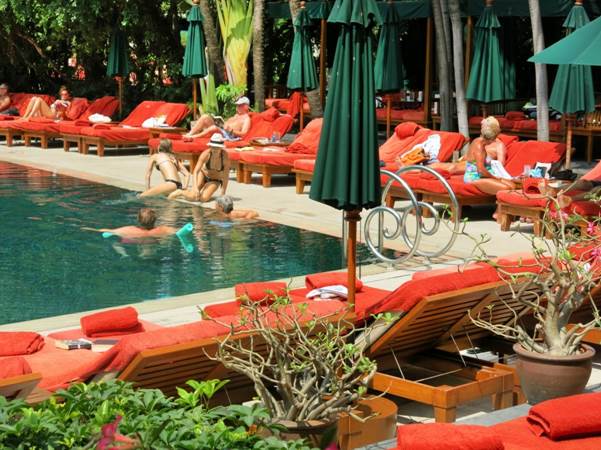 Paradise at the pool of the Mandarin Oriental: Here the rich find a retreat in the hectic town of Bangkok.

Try to snatch one of the cozy little cabanas by the small pool and enjoy a perfect, lazy afternoon with excellent drinks and a tropical fruit plate (the mangoes are to die for). And later you could have a Thai Green Curry, that will be served to your Cabana on a small tray table. 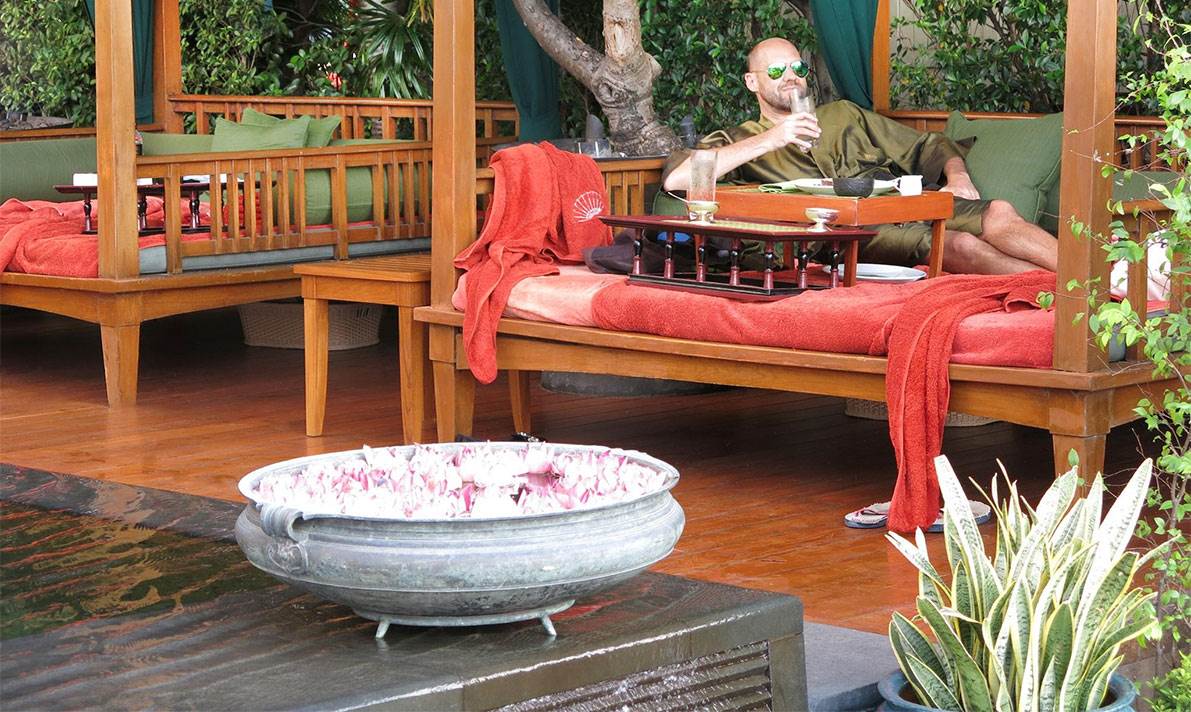 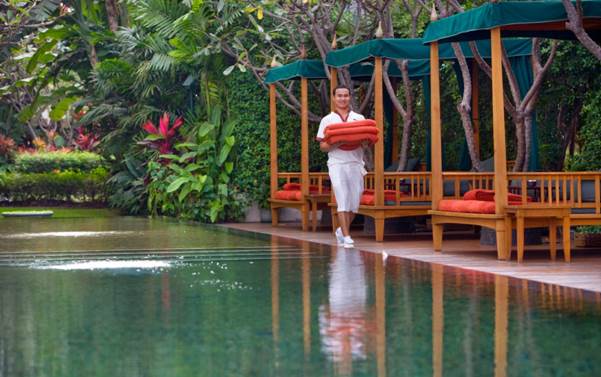 The gym is well equipped and the Oriental Spa is a peaceful yet elegant place. But you have to cross the river to enjoy it: It’s in the part of the hotel located on the opposite side of the river. However, the hotel’s private boats take you forth and back all the time without a wait.
There are two tennis courts, a squash court and even a private jogging track.